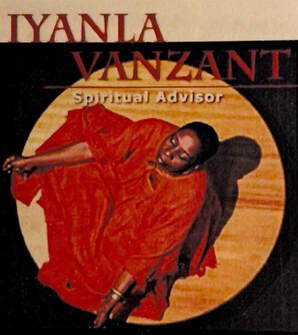 Digital stories were a new phenomenon when I interviewed spiritual counselor Iyanla Vanzant for MSN.COM. Glad I thought to print it out all those years ago! During our powerful talk she said something that made such a huge impression, I've quoted it numerous times over the years. "Opportunities are not going to show up fully dressed. An opportunity is usually going to be raggedy with its nose running, and need a lot of loving care." 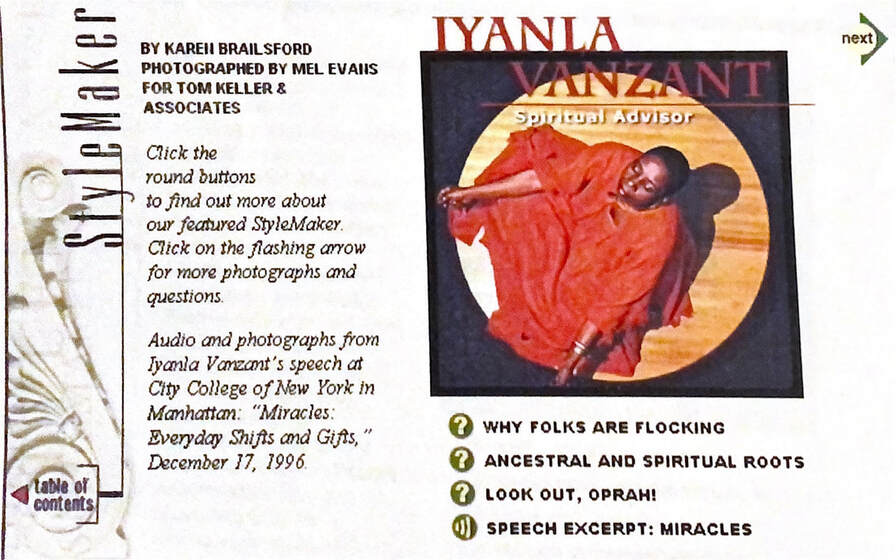 Why Folks Are Flocking

Iyanla Vanzant is undoubtedly the most popular and entertaining African-American spiritual counselor and lecturer around She is also the most prolific. Her works, Tapping the Power Within; Acts of Faith: Daily Meditations for People of Color; Value in the Valley; Faith in the Valley; and Spirit of a Man, have inspired thousands seeking to heal their bodies, minds and spirits Through her organization, Inner Visions Worldwide Network, Vanzant provides workshops and other study tools for maintaining a spiritual life.

​Born Rhonda Eva Harris in Brooklyn, New York, Vanzant, 43, traces her matriarchal line to Dahomey (now renamed Benin) in southwestern Nigeria. She was immersed in the Yoruba culture of those people at a young age, learning about African traditions. Her paternal grandmother is Cherokee. Consequently, she says, "I'm not afraid of ritual, I'm not afraid of nature, I'm not afraid of diversity." When ordained in 1982, she was given the name Iyanla (EE-YON-LAH), meaning "great mother."

Vanzant wants her own nationally syndicated television show. "And I don't want to be stuck on local cable! I'm very  dramatic," she proclaims. "I want to be out front, I want God out of a closet." The humorous and captivating speaker easily draws in listeners, regaling them with stories of her myriad life experiences. Vanzant looks as dramatic as her persona. She often drapes her 5-foot-5-inch frame in vibrant custom-made designs.

What Is Her Spiritual Philosophy?

"It's a life philosophy more than anything else. It's certainly not a religion in the context that people know religion. I believe that religion is man-made and that spirituality is God-given. My approach is just one of total surrender to God. I have discovered that God's will for all of us is our complete happiness and satisfaction. That's why we're here on the planet in the body—to learn how to get to that state of blissful satisfaction as vessels—not as husbands, wives, Democrats, or Republicans, but as vessels and channels of God."

I first saw a vision of the divine mother when I was about 10 years old. I'm looking in the mirror and I see this woman walk up behind me. I totally freak out and I fall off the sink where I'm sitting playing with my face. It was very disconcerting to me because that's not something you go around and tell people—I saw Mary in the mirror! But I was blessed because through my grandmother and her rituals and my exposure to African culture. I knew about angels and I knew about guardian spirits. I just happened to see Mary."

Up the Rough Side of the Mountain

Vanzant's mother died when she was two, she was raped by an uncle at age nine, and had her first child at age 16, and by 21 had a total of three. The spiritual advisor spent 11 years on welfare, and by age 30 had her jaw broken by an abusive husband, and had suffered a second nervous breakdown. "My life hurt," she says simply.

Vanzant enrolled at Medgar Evers College in Brooklyn in 1978 and then went to law school, practicing as a criminal defense lawyer in Philadelphia. "It was a spur-of-the-moment thing based on a sign that I saw on a bus. I just made a decision—I'm going to college—and everything fell in line," she says. "And it wasn't easy. That's the thing people need to understand. "Opportunities are not going to show up fully dressed. An opportunity is usually going to be raggedy with its nose running, and need a lot of loving care."

Vanzant quit law the way she does everything. Dramatically. "I left the honey and the tea bags in the drawer, and my children's pictures on the desk. I just walked out and said I couldn't go back." Speaking gigs about Yoruba culture led to her own radio program. An autobiographical piece for Essence in 1989 evolved into her first book. "I realized it wasn't culture, it was the spirit of the culture," she says. "The message turned from Yoruba culture to the spirit."

Vanzant lives in a white-shingled colonial in Silver Spring, Maryland, with one of her daughters, Gemma, Gemma's husband, their daughter, and a grandson. It is more suburban than New Age, furnished with elegant overstuffed chairs and plants, instead of crystals and chimes. "What makes a place sacred is my intention when I go there," she says. "When people see me there, they know to go away."

How Do You Relax?

"It all depends on what day it is. Some days I just veg. Like this morning I got up and I had an entire agenda of things to do and places to be. But my body said, 'No, this is not what we're going to do today.' Sometimes you just have to stay in bed. I watch television. Other days I may go to the gym or to the spa. Sometimes I go get a massage and sit in the hot tub. Then there are days when I'm just working and working and the only relief I get is to sit still for two minutes and just breathe."

Rising in the Spirit

"If I'm having a real good day, I get up and meditate. My mate, Adeyemi, and I start our day with prayer. We're reading a book together, so he'll read to me and I'll read to him. We usually end our day like that, too. I also have a prayer partner and she and I start every day with prayer. Then there are days I wake up late and I start running just like everybody else. When I get in the car, I'll pop in a tape of one of teachers—Charles Fillmore, Johnnie Coleman, Barbara King, Marianne Williamson, Wayne Dyer. Or I'll pop in a gospel tape. It's all flexible. You have to be enough in touch with yourself to honor what you need, when you need it, and how to give it to yourself."

Instead of the Therapist's Couch...

"I'm a soap opera fan, so when I get a day, I watch soap operas. Everybody who knows me knows not to call me Tuesdays between 10 p.m. and 11 p.m. because I'm watching NYPD Blue. And don't call me Thursdays between 10 p.m. and 11 p.m. because I'm watching ER. Sometimes I'll rent a movie, or sew. ...My favorite form of therapy is cooing. That's the time when I can be with myself and do something creative and nourishing, and also do something that brings everybody joy because everybody in my house likes to eat."

"I'm in the process now of taking the year off," says Vanzant, who estimates the travels four days out of the week doing books signings and lectures. "I don't want to fly anywhere, I don't want to talk to people, I don't want to nourish anybody. I've been very mindful of the fact that my cup runneth over, but what's in the cup is mine and it's time for me to nurture myself. ...I haven't played in a long time. I want to gather my toys and play." Vanzant says she and her mate, Adeyemi, are also considering getting married.

"We've set up safeguards so you don't have to have me. You can get the work through the mail," says Vanzant, whose network sends out commentary on a spiritual principle to members every 40 days (800-POWER27). "One of the things I have always taught is, it's not ME. I may have the information, but it's your desire to grow and to heal and to do better, that is what's going to sustain you. We're taught that our salvation if going to come in the body of another person. That simply is not true. What I have hoped that my work has done is give people the tools. And you can take your toolbox anywhere and open it up and pull out what you need. Even during this next year, I want to continue to provide people with the tools, but my body doesn't have to be one of them."

The Key to Rejuvenation

"It takes place every second that you consciously choose a new way. That's how you can rejuvenate yourself. When you find yourself in the pit of despair, choose to raise up. When you find yourself in lack or restriction, choose a wealthy thought. You don't have to have a treadmill or a plan. You don't have to have a college degree. All you have to do is to have an idea and a desire—and make the decision. You will rejuvenated."