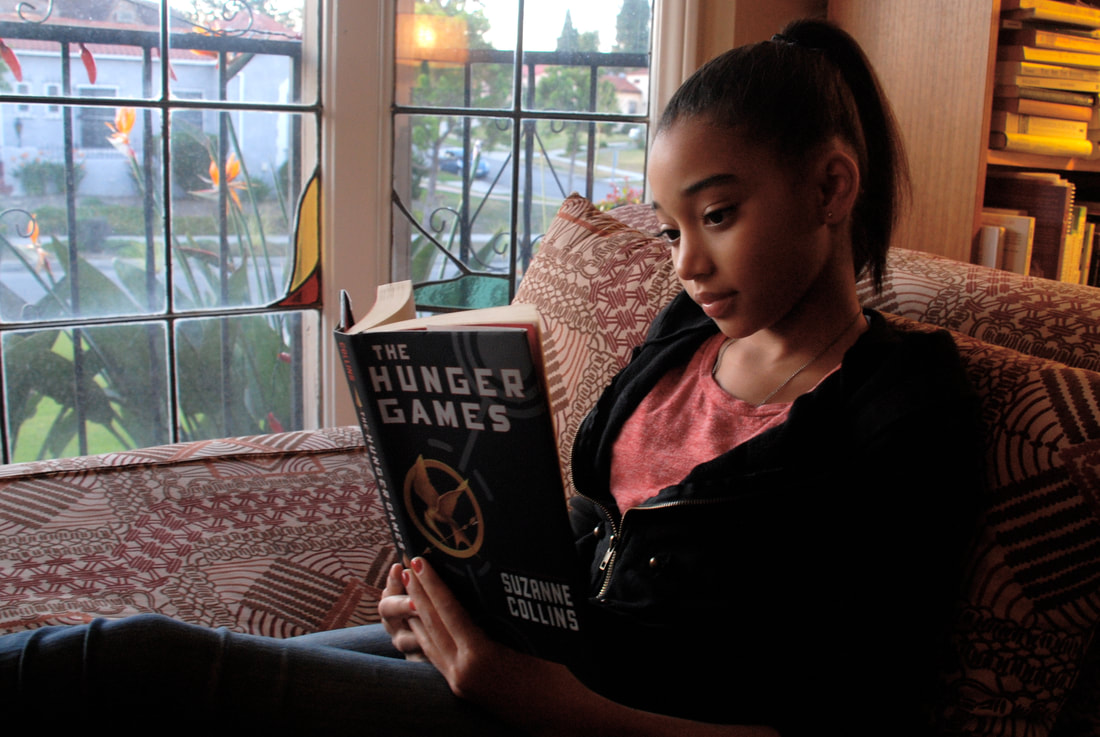 PUBLISHERS WEEKLY
​Hungry for More About the Hunger Games? A Q&A with Amandla Stenberg (aka Rue)
By Karen Springen
Jan 19, 2012

When my former Newsweek colleague Karen Springen interviewed Amandla for this Q&A, I styled and shot this photo of her reading The Hunger Games. Later, a publisher reached out for permission to use the photo in Mass Communication: Living in a Media World, a college textbook.

​Hungry for More About the Hunger Games? A Q&A with Amandla Stenberg (aka Rue)
By Karen Springen
Jan 19, 2012

Unfortunately for fans of Suzanne Collins’s The Hunger Games, the trilogy ended in 2010. But fortunately, the franchise gets a new lease on life with the release of the big-screen version of the first novel on March 23. So far nearly six million fans have watched the trailer for the Hunger Games movie on YouTube. Eighth-grader Amandla Stenberg, 13, who portrays Rue in the film, talked with PW reporter Karen Springen (a longtime friend of Amandla’s mother) about reading the books, shooting the post-apocalyptic story, and getting everyone on the set to sign her copy of The Hunger Games.

How are you musical?
I like to sing. I play guitar, violin, and drums.

Did you read The Hunger Games in one night?
I think it took me about two nights to finish it. I couldn’t put it down, and my nose was in the book the whole time. It’s such a page turner, and Suzanne Collins’s writing is so vivid. Everyone was wondering what I was reading. After I finished it, my dad took it, and then my mom.
​
How many times have you read the series?
I’ve read the first book at least five times! I never get tired of it. 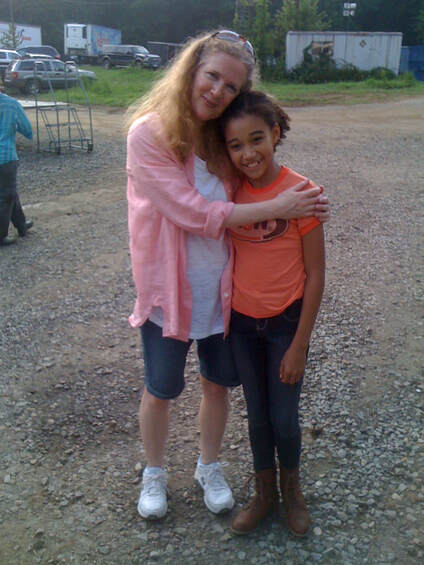 Stenberg with 'Hunger Games' author Suzanne Collins on the set of the film in North Carolina.
​Had you read it that number of times before filming started?

I read it four times before I started shooting. I read it a fifth time when I learned that I had been cast.

Was Rue your favorite character when you were reading?
Rue and Foxface were my favorite characters, probably because they’re not necessarily bad. I loved Rue because of how musical and sweet she is. Now that I’ve read the book a few times, I actually like the character Clove a lot. She’s very skilled with how she can throw knives. And everyone loves Katniss!

How did you find out about auditioning for the role, and how did you prepare for it?
I heard that they were making a movie, and I already loved Rue. I called my agent repeatedly, saying, ‘Please, please, please get me an audition.’ After my many, many phone calls, they got an audition for me. That was my golden opportunity. I prepared and prepared, and I went in and met with the casting director, Debra Zane, who helped me, before I met with Gary [director Gary Ross].

What did you do to get into character and make yourself feel like Rue?
For my audition, I went to Gary’s house. To get prepared, I dressed up like Rue. I wore khakis and a T-shirt, and my mom had rolled around my clothes in the dirt before. And we put twigs in my hair and leaves all over me, and stains were all over my clothes. And I had a little wreath of flowers in my pocket that I thought Rue might have. That was in my pocket as good luck, and also a special rock. Those were my little tokens I thought Rue would have.

Did you show them to the director?
No, I didn’t. It was kind of like my special secret.

How long after the audition did you learn you got the part?
A couple of very nail-biting weeks!

What kind of physical training did you need to do? Did doing gymnastics in the past help?
I think my smallness helped. I’m quick and light on my feet. 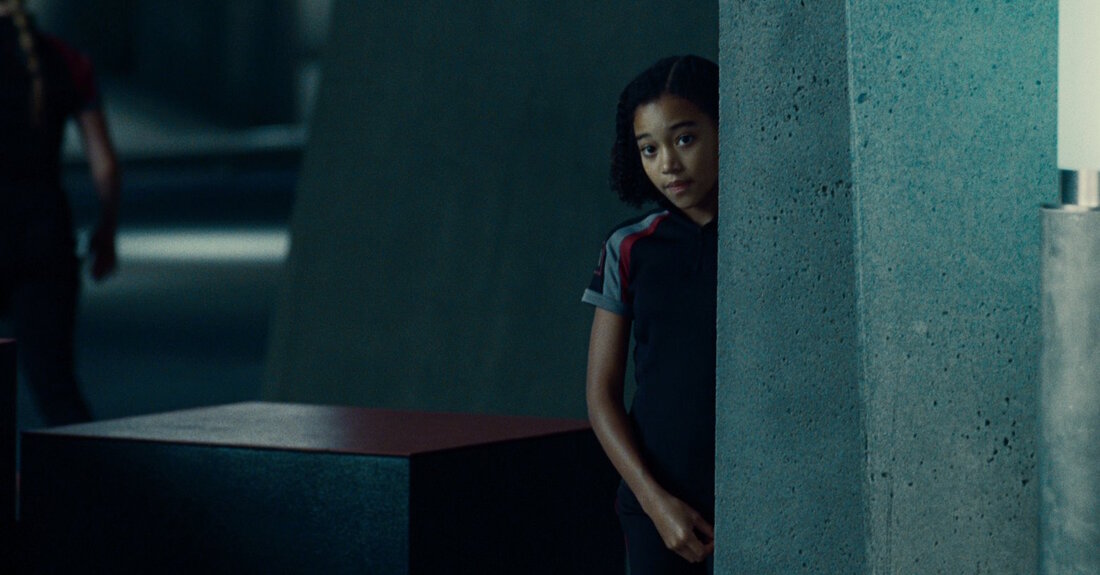 Stenberg as Rue in a still from the forthcoming film. Photo: Lionsgate.
How many days was Suzanne Collins on set? And did she give you any pointers on Rue?

She was there for two days in the middle of shooting. It was so amazing to meet her – the creator of all this. We were doing a very traumatic scene, and I was kind of bawling my eyes out. I wasn’t quite sure if this was how Suzanne Collins imagined the scene. And so I talked to her, and she told me just that Rue was trying to be very strong for Katniss. She wanted Katniss to go on, so she tried to be very brave for Katniss. That was very helpful.

So did you cry less?
Yes.

Because you were trying to be brave?
Exactly.

Did Suzanne know you were a huge Hunger Games fan before you were cast?
Yes, I told her how much I loved her writing! I’m so glad I had the honor of meeting her. She was very sweet and wrote a note in my book thanking me for my work in the movie. A lot of the other cast members signed it as well. We were signing each other’s copies like yearbooks.

How many times did you shoot your big scene?
Probably around 15 times. We did it in different ways and different angles.

How did you feel about the violence in the book?
I wouldn’t say the violence is such a big part of the book or the movie. It’s about survival. It’s a warning to the world to not become so desperate and barbaric.

Did everyone read the book during filming?
I don’t think anyone was reading it while we were on set. People were reading the script. Before we started shooting, a lot of the cast members re-read the book. [Jackie Emerson, who played Foxface, read it with her entire school before she was cast.]

What other good books have you read recently?
I’m always reading a book! Right now I’m reading Cleopatra’s Moon. I cannot put it down. It’s about Cleopatra Selene, who was Cleopatra’s only daughter. It’s a very interesting tale about how she loses everything. As soon as I finish Cleopatra’s Moon, I’m going to get Legend by Marie Lu. I’ve heard a lot about it.

I also read the Maze Runner series, another post-apocalyptic story. I’ve read the Mortal Instruments series, I was obsessed with those. A Tree Grows in Brooklyn by Betty Smith is one of my favorites. Even though it doesn’t have any monsters or crazy fantasy in it, it’s such a raw story, and I can really relate to the characters. I think it’s a beautiful story. And I read Forge by Laurie Halse Anderson for my summer project for school.

Were the actors all friends even though you didn’t all get along in the storyline?
I don’t think any of our characters’ conflicts were real. We spent so much time together. You’d never think Clove and Rue would be snuggling up together, but we were. We became so close. Even Jack [Quaid, the son of actors Dennis Quaid and Meg Ryan], who plays Marvel [the male tribute from District 1], we became so close. And you’d never think that would happen because of what happens in the game. I don’t think the characters hating each other had any effect on our relationships.

Is there anyone on set who was especially fun to meet?
There are so many people I was so psyched to meet. I was so nervous before I met Jen [Jennifer Lawrence, who has the lead role of Katniss Everdeen]. But then I became so relaxed when I got to know her. It’s really rare to have such a great group of people. The cast and crew of this movie were so fantastic.

Have you seen the finished movie?
I haven’t. I’ve seen little snippets here and there, just going into the recording studio for extra sound. Hopefully there will be a screening before the premiere. I’m just another fan who can’t wait to see it. When we were on the set, you couldn’t really tell what the movie is going to look like. Editing and music is such a big part of it.

You don’t even know what the music is going to be?
I know a little bit of it. When I went into the recording studio, they gave me a sneak peek of some of the movie. It’s the same as the trailer that came out — kind of that same feel. A new Taylor Swift song, "Safe and Sound," is already out. We don’t know how it’s going to be used. I love it. It’s really pretty and haunting.

Did Taylor Swift come to the set?
She didn’t! I didn’t even think she was involved with the film until the song was released. I find out everything like everyone else!

How do you think fans will feel about the film?
I think fans will be very, very pleased with the movie. I know from what I’ve shot and from what I’ve seen, it really stays true to what I thought of the book. It really embodies the feel of the book, and it keeps what is really important in the book about Katniss’s emotions and her survival. That’s really important. They did a fantastic job bringing that to life. Everyone involved is very concerned that the fans are happy with it and that they enjoy it.

Which boy were you rooting for?
I’m kind of conflicted about that. I love the character Gale when Katniss first lived in District 12, and then I loved Peeta when she went in the game. I started to root for Peeta just because I was frustrated with Katniss for kind of mistreating him. Then I was team Peeta at that point. And then at the end I was definitely team Peeta.

You shot the movie in the summer, when there was no school?
Yeah, it was perfect. I started shooting the movie a couple of days after school had ended. I finished shooting three days before school started.

Between seventh and eighth grades?
Yes.

You filmed in North Carolina?
We shot in Asheville and in Charlotte. Asheville is such a beautiful town and so green compared to Los Angeles. It’s also very cool. It’s kind of like a little hippy town. There are all these little shops and libraries and clothes stores. We had so much fun there.

What about your free time?
It kind of ebbed and flowed. The first couple of weeks we had a lot of free time. We were going out and getting sushi and ice cream and going shopping together. Sometimes it would get really busy, and we’d be working, working, working. It really depended.

What makes this novel work so well as a movie?
Viewers and readers become so attached to the characters just because they’re so interesting. We can really relate to them and their emotions. That will translate to the big screen really well.